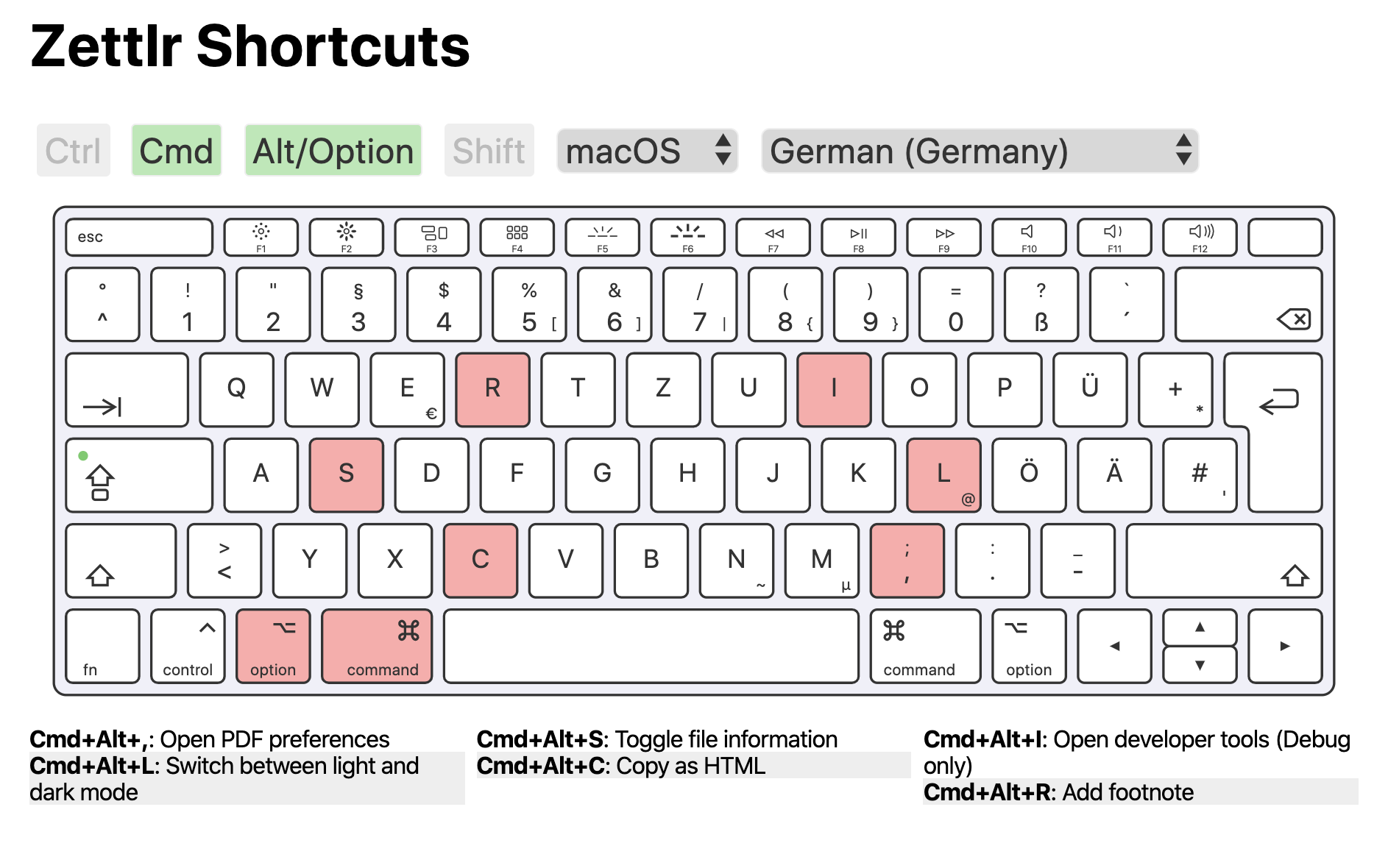 A lot of applications have a plentitude of different shortcuts. While text editors mainly make use of shortcuts defined with at least one modifier key (Control or Alt), photo, video, and music editing applications even use simple keys such as "A" or "#". Additionally, depending on the state of the documentation or your own keyboard layout, it may be hard to see a reason for the placement of different shortcuts, making it even harder to understand the logic behind the app. For instance, Ctrl+[ and Ctrl+] are often used as quick shortcuts, but they don't work well with European QWERTZ or AZERTY keyboard layouts as they require additional keys to be pressed. Furthermore, the more advanced a piece of software gets, the more shortcuts are required and problems ensue for both users and developers. As an app developer, you may accidentally use a shortcut twice, effectively disabling one functionality of your app. And as a user, when almost every key on your keyboard is mapped, it may be hard remembering the most important shortcuts, frequently pressing wrong keys and over-using Ctrl+Z as a result.

The shortcut generator is a small tool that aims to change that problem. It takes all shortcuts for an application as an input, and intelligently maps them onto on-screen keyboards, highlighting not only whole layers of shortcuts, but also highlighting the specific keys needed to trigger a specific function, making it easy to understand the shortcuts of the app. It even thinks of cross-platform applications and different keyboard layouts.

But as we are talking about a visualisation tool, it's hard to explain without images. So take the app Zettlr as an example. The shortcuts can be understood as different layers. Layer one is the keys without any modifier keys pressed. As Zettlr is a text editor, you will notice that it does not map any standard keys to shortcuts: 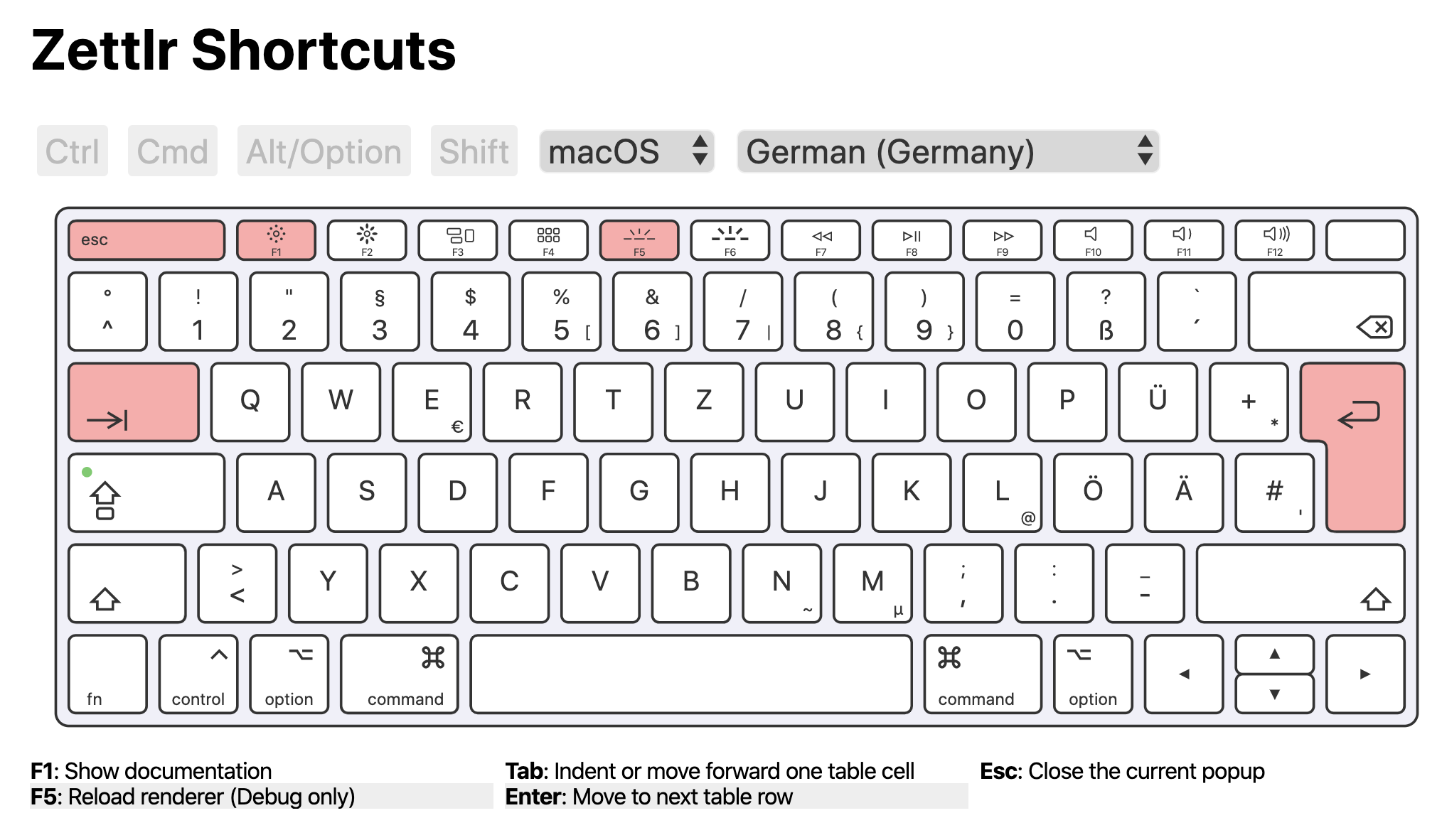 If we, instead, display the Cmd-layer (or, Ctrl on Windows and Linux), we can clearly see that almost every key is mapped to some functionality: 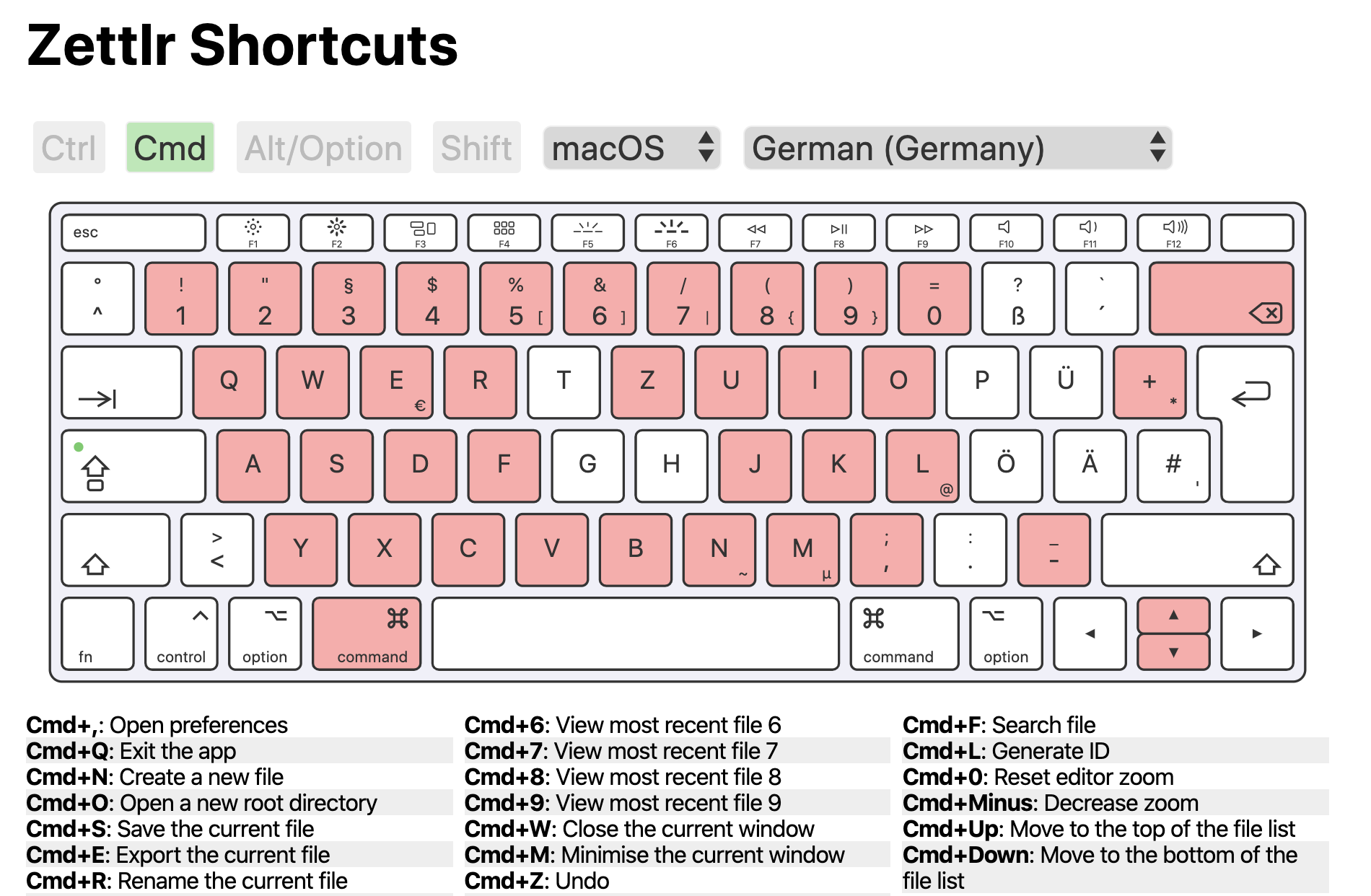 But at a certain point, the keys themselves are not good indicators of what functionality they trigger. For instance, Cmd+Alt+L triggers the dark mode of the app. What does "L" stand for? It is not immediately obvious. But once we have a look at the layer, we clearly see the design principle that undergirds the Cmd+Alt-layer: Accessibility from a purely physical point of view:

As you can see, all the Cmd+Alt-keys are accessible using only one hand on the macOS-keyboard. Now, you can make the test and determine what these shortcuts look like on Windows: 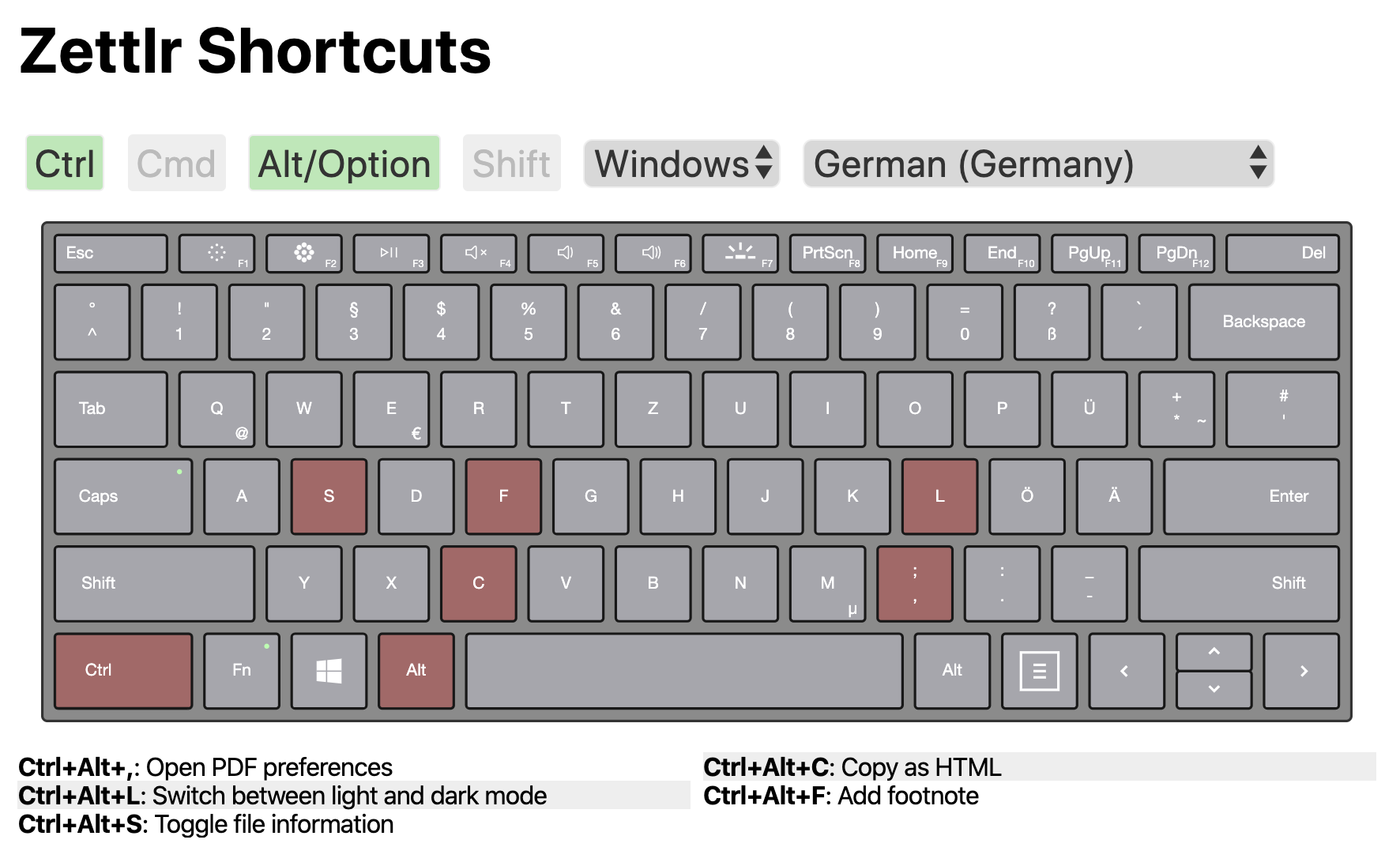 Clearly, the Windows keyboard layout with Ctrl and Alt having a lot of space between themselves, does not work as ergonomical as the macOS-keyboard. But on Windows, a lot of shortcuts are mapped not to Ctrl+Alt, but to Ctrl+Shift, as you can see: 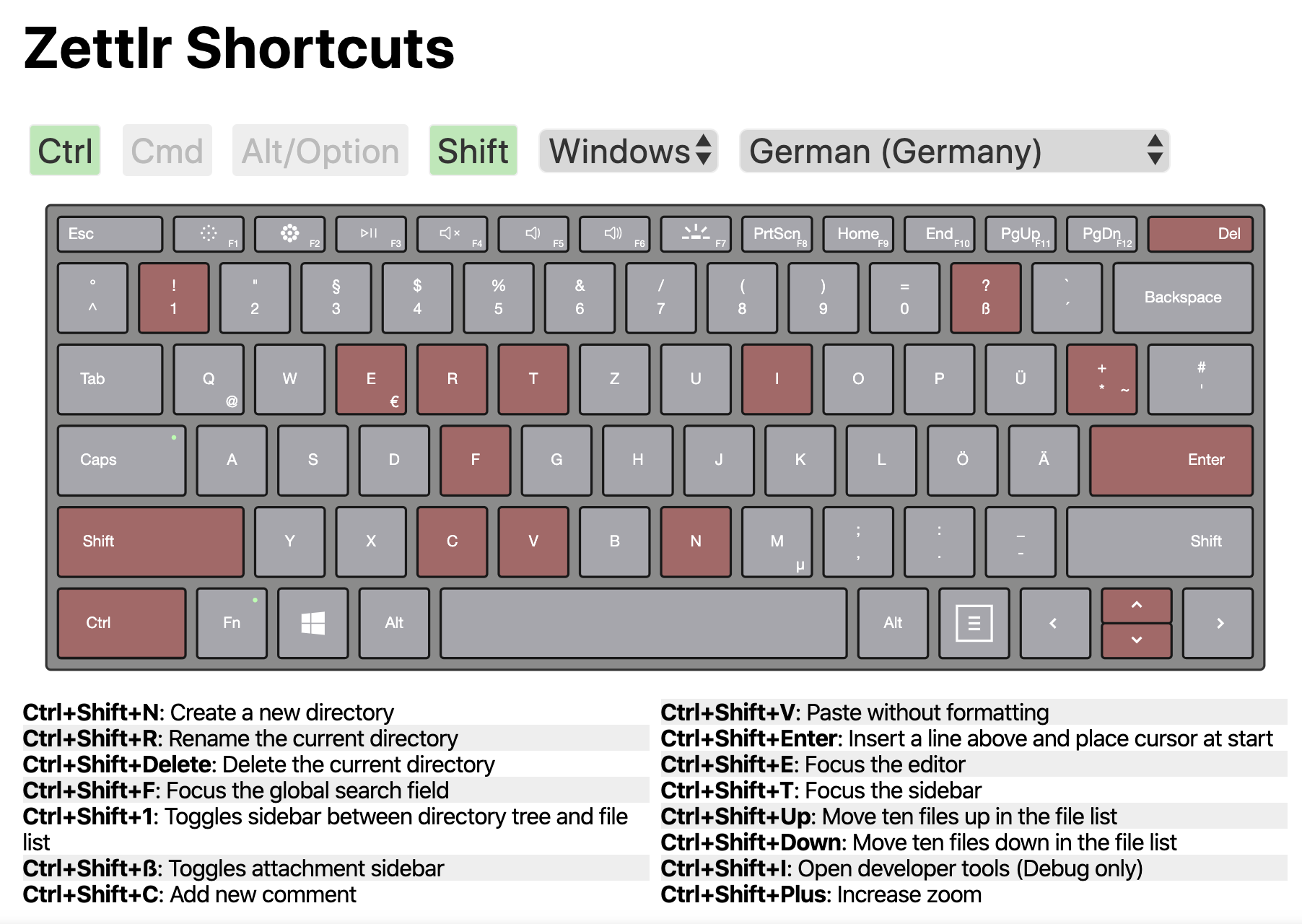 The shortcut generator helps both users and developers identify various issues with shortcuts, and helps them remember the most important ones in an intuitive way. More specifically, it helps …

And the best is: The Shortcut Generator is free and Open Source software! You can view and download it on our GitHub account: https://github.com/nathanlesage/cheatsheet-generator.

For installation and build instructions, please see the README-file. Note, that the shortcut generator requires some basic programming skills, as it is meant as a tool for developers to enhance their own applications' documentation. If you would like a cheatsheet for an app, but don't know how to use the cheatsheet generator, it may be a good idea to point the developers to this tool.

Zettlr uses Matomo to analyse our visitors's behaviour. In compliance with the GDPR (General Data Protection Regulation), you can choose to opt out of tracking.