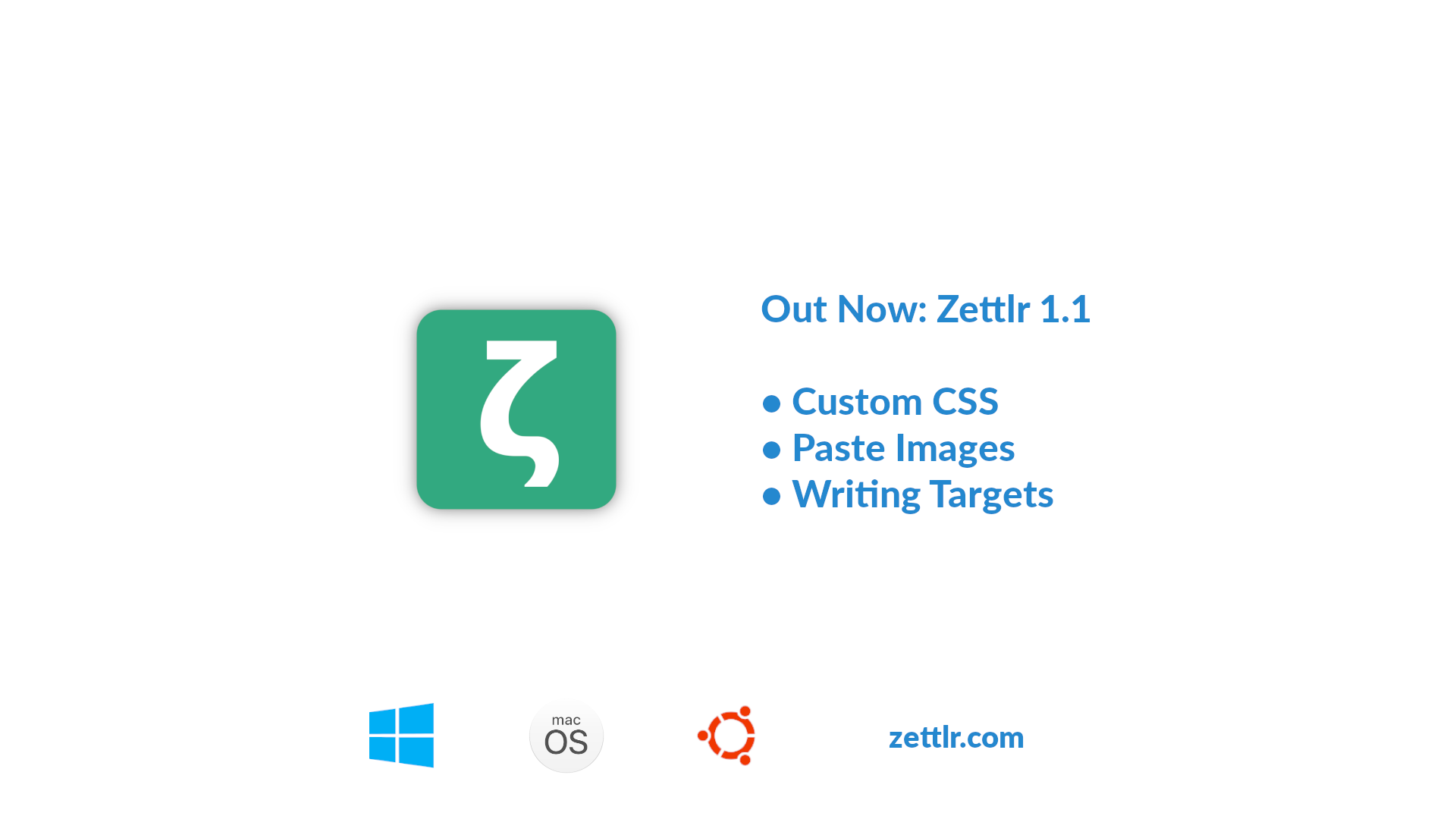 Posted in Announcements, Releases on February 08, 2019

Zettlr 1.1 has arrived! Now you have even more power to customise your installation so that Zettlr aids your writing workflow even more!

Posted in Announcements, Releases on February 08, 2019

It's Friday and again we have a new release for you! This version encompasses a ridiculous amount of new features, so for a short time we thought about naming the release 2.0.0 (but that would have been even more ridiculous, wouldn't it be?). Among the usual bug fixes — here mostly fixes concerning the tag handling and design — we have plentiful of features for you. Here a short list of all of them, before we dive into them in more detail:

Attention! A small notice before you indulge into all the neat new features we've packed into the app. Zettlr has internally switched it's locale format, which means that by installing the app you will reset your localisation options. So after installing you will have to manually switch the language back to the one you had (in case you diverted from your computer's) and you will also have to reselect all dictionaries. It's nothing bad, but just so you don't wonder why the app suddenly speaks another language :)

Let's start with the obvious: you have now total control over the application's design! Many of you have asked us to implement the ability to change the editor's font, some find the folding markers annoying, and maybe others want to implement a complete new design. With the custom CSS feature, it's all up to you! Simply open up the CSS editor at Zettlr->Custom CSS… (macOS) or File->Custom CSS… (Windows and Linux) and start typing!

To get started, please refer to our new documentation on how to style Zettlr! We also provided some basic snippets which allow you some basic customisation (including the font-change).

Spoiler alert: We're currently working on three different base themes, which will be shipped with a future version! So if you're lazy and want us to do the main work, just keep waiting until we hit you with themania (pun very much intended)! 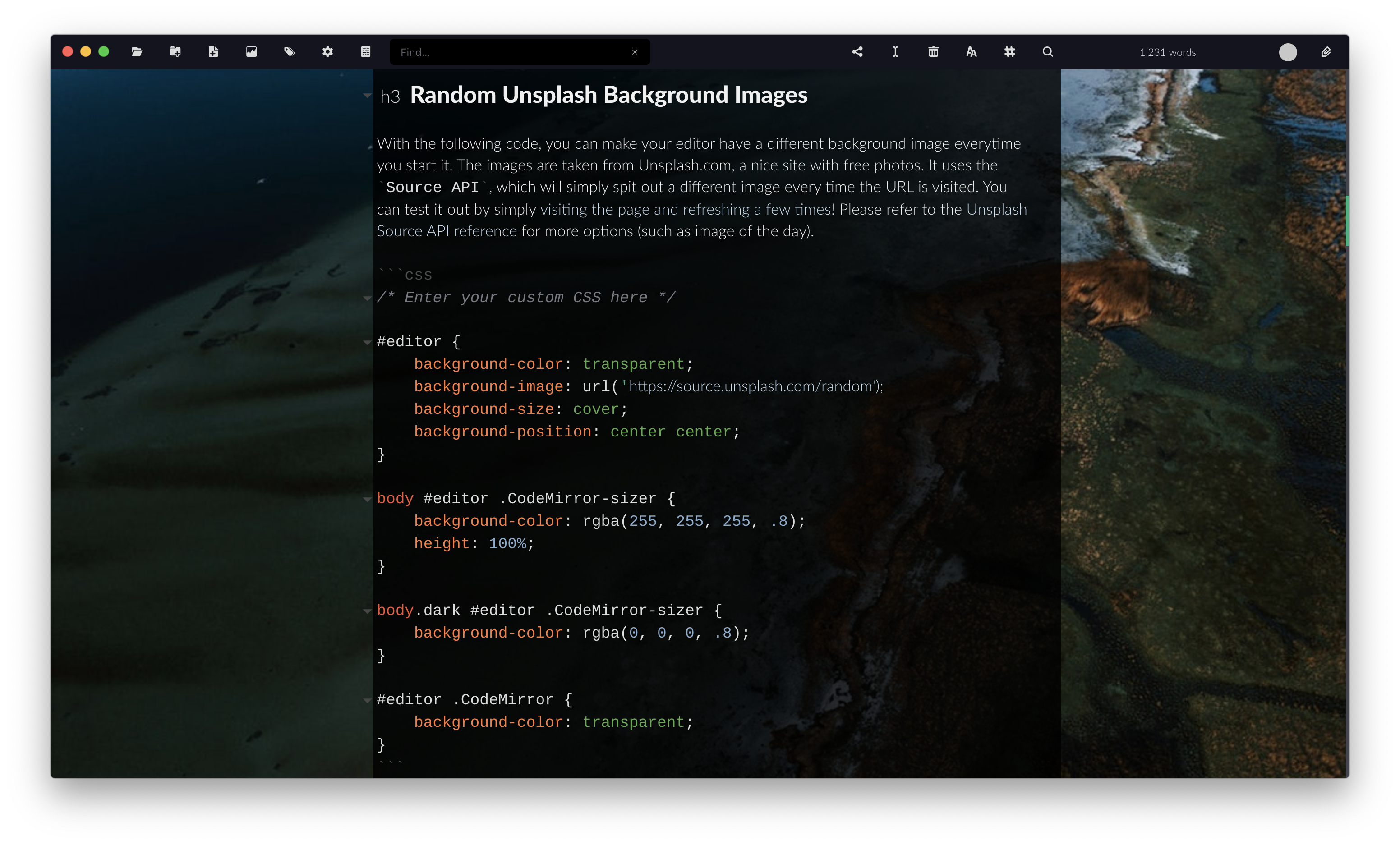 An issue that has been opened by SeeSeeKey over half a year ago has finally been addressed: Zettlr now enables you to set your own writing targets! Simply right-click any file in your list and choose Set target…. Enter the amount of words or characters you want to achieve and click Set to apply the setting. Make sure to have snippets activated in View->Snippets or in the preferences (or by using the shortcut Cmd/Ctrl+Alt+S) and hover over the small round indicator to see an absolute and relative value of what you have already achieved!

To remove the writing target from a file, simply set it to zero and save!

Another feature that has been demanded — and really is an obligatory feature for any modern app — is to paste images directly from clipboard. That is now possible! Just hit Cmd/Ctrl+V. A dialog will appear, letting you preview the image currently in clipboard.

If you hit Return right away, Zettlr will do the following:

Of course, you have the chance to change the filename or even resize the image before saving. Click Choose directory … after you have made your adjustments and select a target directory. Zettlr will then save your image there. 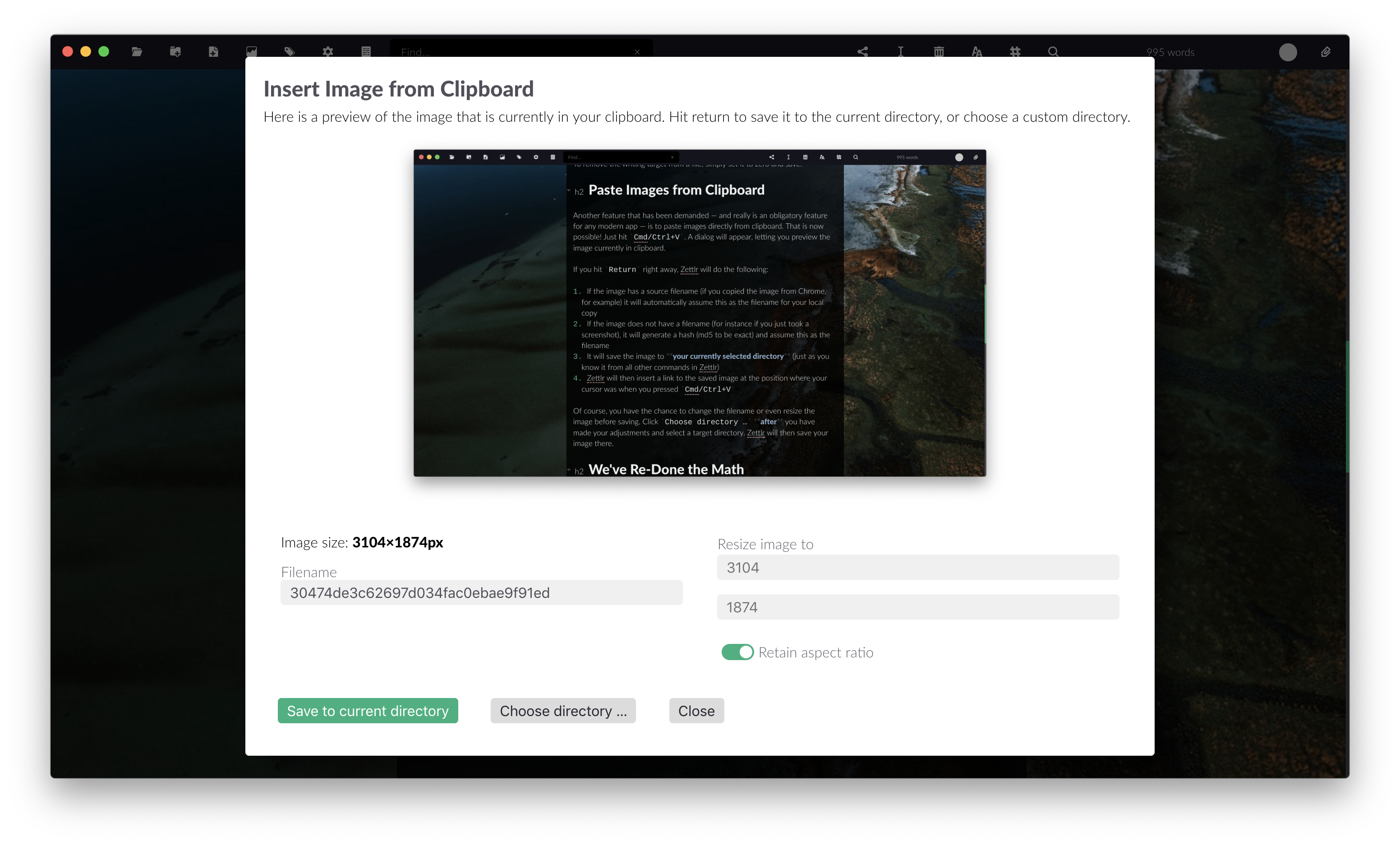 Another great thing we've accomplished is that we've completely refurbished the statistics dialog. Until now it was basically a list of all the days you've written anything crunched together in one way too small graph. We have rewritten the complete logic to better handle your statistics. From now on, you can choose to view weeks, months or years and even compare them across time! 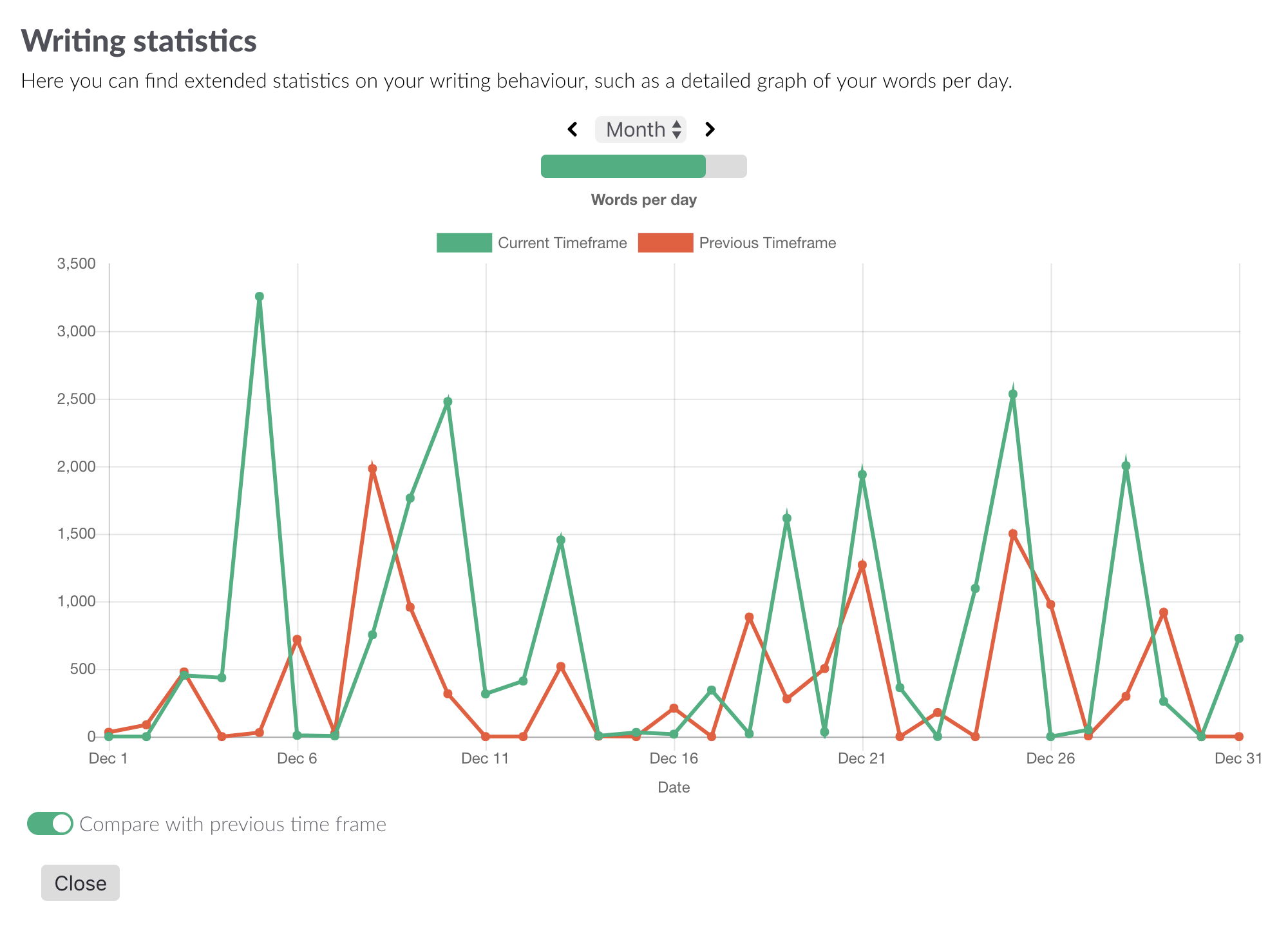 Although we're all digital natives, there are still people that want to print something, obviously. So we finally did the obvious and enabled the internal Electron Print support. This means you can now print by either selecting the appropriate menu option or using the also-obvious shortcut (Cmd/Ctrl+P) to open up the print dialog. Simply click on the Print-Icon in the titlebar to print the file after you've confirmed it is as you expect it to be.

We dream big, but we also care about the small things. Therefore we have fixed plenty of small nasty bugs. Among them are mainly design fixes (for instance the search results previously were unreadable in the dark (mode) — one of our unintended puns), and fixes with the tag recognition engine.

Now it's also possible to finally drag out files from the app to the left (up until now this mostly resulted in you "losing" the file, because the app dipped it into whatever directory your mouse happened to hover over at the moment you left the app's border).

We've also treated badly the French-speaking people among us, because one of the translation strings wasn't properly escaped, literally leading to a catastrophe with an apostrophe when using the preferences-dialogue. Apologies! Finally, you now have the option to hide directories in the file list while performing a global search. This makes the list much smaller, especially if you're of the Marie Kondo-type trying to find the Pareto-Equilibrium of 80 percent boxes (a.k.a. directories) versus 20 percent files.

With this massive amount of features, this release marks yet another milestone for Zettlr. We've furthered the development of the app another far step into the era of researchers being able to use a modern and future-proof format for writing papers and sorting your notes — all in one app!

This reminds me of asking you to consider a donation if you like the software, so that I can pay for the server rent and continue to develop the features you need for a perfect workflow! You can donate directly via PayPal.