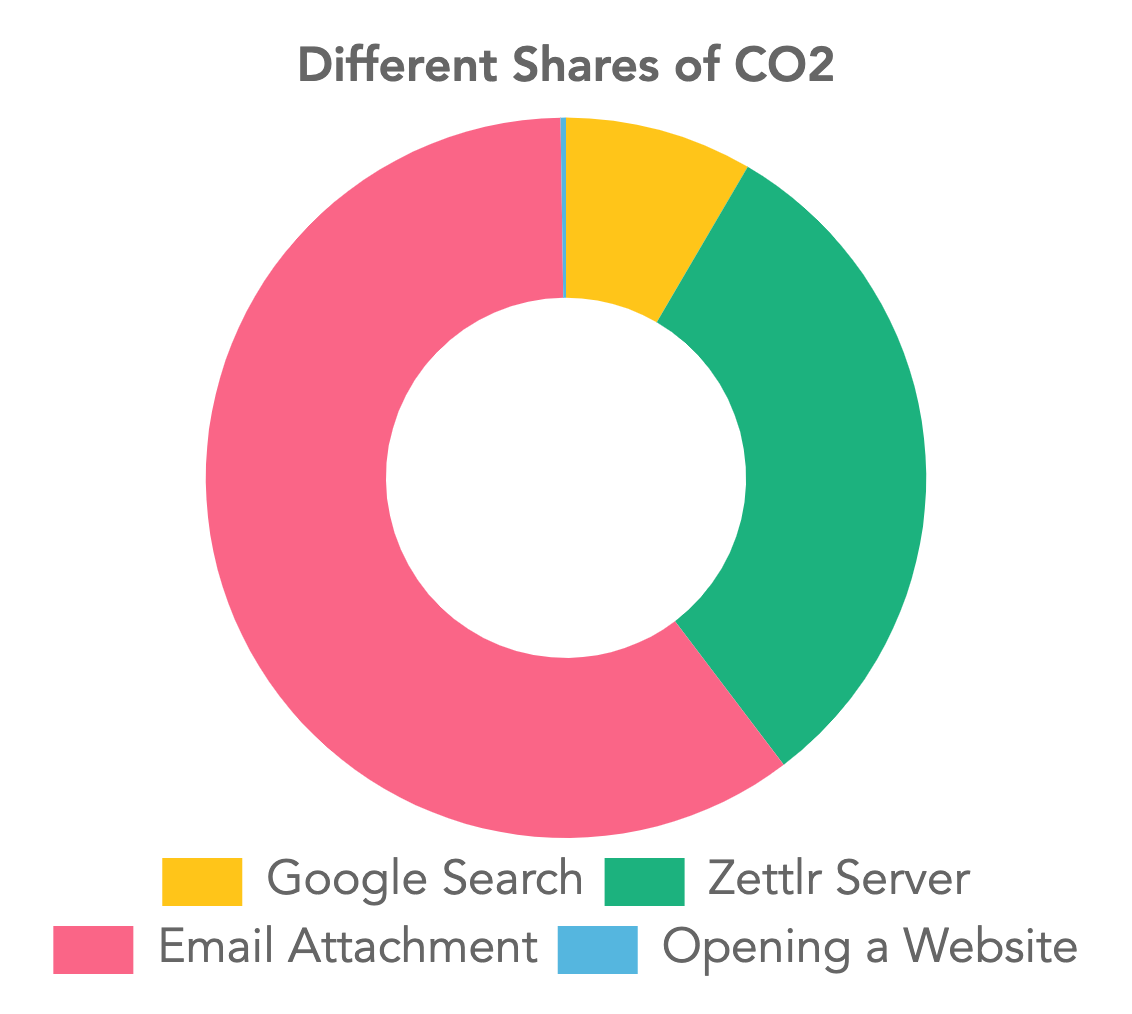 Some Notes on Climate and the Internet

Due to the extreme heatwaves this summer, the discussion about climate change is heating up as well. With groups like Extinction Rebellion and Fridays for Future demanding government action, we asked ourselves: How much do we contribute to the global carbon emissions? The answer might surprise you.

Some Notes on Climate and the Internet

With the first human-made climate catastrophe unfolding before our very eyes, this summer's heatwaves around the globe have made it explicit once again that humanity as a whole needs to act now, lest we want to quite literally burn the planet. While the main share (around 70 percent) of greenhouse gases are emitted by only 100 companies, each and every one of us can also do something to reduce our own carbon footprint. In an already four-year-old infographic, we can see that each email and each website that we visit produces some carbon dioxide. Each Google search, for instance, produces up to 7 grams of CO2 -- which is a lot, given the fact that the same amount of energy is used when we boil water for a cup of tea.

Still, these are small amounts and it is completely okay to produce CO2. After all, the problem is not that we produce it, but the amount we produce. And this brings us to the main concern of this article: While individual actions on the internet are mostly negligible, what about servers that serve thousands or even millions of users each day? Definitely, these must produce a lot CO2 so that people and companies using servers have quite a large Carbon footprint. Right? This was the question we asked at Zettlr. We are concerned with the fact that we could inadvertently be one of the culprits when it comes to heating up the planet. But wild guesses and irrational fear of something we don't really know doesn't help at all. So we went out there and simply asked.

We at Zettlr are making use of a server we rent from a hosting company. It's quite large and helps us deal with thousands of visitors and API requests per day. It also manages our mail, serves as a cloud for our data and quite a bunch of other services that we make use of at Zettlr (have a look at Zettlr Translate, for example). The server is located in a data centre in Strasbourg, France, which has opened its doors in 2010. As we wanted to know how much energy we actually produce, we asked the support for some numbers, and behold: they answered. While many numbers are company secrets, the promotional flyer they've sent us contained the necessary numbers and with some calculations, we knew how much carbon dioxide our server produces.

The data centre in Strasbourg is being advertised as one of the most energy efficient ones worldwide with a Power Usage Efficiency coefficient (PUE) of 1.18. The PUE coefficient refers to the ratio between power used for auxiliary tasks such as cooling versus the power used for actual computing. So a PUE coefficient of 2.00 would mean that twice the amount of energy is being used for cooling than the amount necessary for the actual computing. To compare the number: Google reports across all of its datacenters a PUE coefficient of 1.21, while Microsoft reports 1.22, according to Wikipedia. One should note, though, that this coefficient doesn't say anything about the total amount of carbon emissions. Facebook (reporting PUE coefficients close to 1.0) and Google, for instance, belong to the biggest producers of CO2. Most of it is being used for actual computing, but still the numbers are mind-boggling. Here you can compare some everyday activities on the internet and one assumption you have about the internet is right: Facebook comments are indeed bad. They produce an insane amount of carbon emissions.

But the PUE was not what we wanted — we want absolute numbers to break down the amount of carbon emissions we are directly involved with. Host Europe claims that its data centre consumes 25 percent less energy and, by this, can save approximately 24 million kilograms of CO2. So multiplied by three, we now know that the data centre produces roughly 72 million kilograms of CO2 per year, or 72 thousand tons. But the benefit of having a data centre means that a lot of hardware can be bundled together, reducing costs for cooling and maintenance, so there are thousands of users whose data is hosted there. The total number is a company secret, but we are only interested in the amount of CO2 our own server produces.

Breaking down the Carbon

So we need other calculations, otherwise we won't be able to tell much by looking at 72 thousand tons of CO2 per year in that data centre. In the same brochure, they claim that the data centre supports up to 50.000 physical machines that can be stored in the centre. So let's assume each server roughly uses up the same amount of energy (as most of them are standardised anyways, with only some exceptions for custom requests), we end up at approximately 1.5 tons of CO2 per server each year, or roughly four kilograms of CO2 per server per day. This number is already extremely low, but still reasonable. The production of a kilogram of meat produces about the same amount of CO2 as one server.

We can go even further, because modern servers are not exclusively made for single customers. Each server can host multiple so-called virtual servers, using virtualisation technology, mostly VMWare. But as this number is a company secret, we don't know how many virtual servers there are per machine. Nevertheless, the internet saves the day once more! The limitations for virtual machines on VMWare hosts are at about 300 per server. As the article continues to explain, nobody will ever make use of the full amount of virtual machines to account for failures and problems. Therefore, let's assume Host Europe only hosts about 150 virtual servers per machine. Then we end up at the number we are interested in: 26 grams. This is the amount of CO2 produced each day by the server of Zettlr. Remember the cup of tea? Four cups of tea equal the carbon footprint of our server a day. This means that the Zettlr server is basically the internet's equivalent to a teakettle! In other words: For each steak you eat, you are responsible for as much carbon dioxide as the Zettlr server produces in three months.

What do we make of these numbers? Well, first of all, it shows that the internet is not producing the lion's share of the global carbon emissions. While there are some companies that are major culprits to the climate change, for the most part the internet is rather harmless. The numbers show that by maximising the efficiency of how to provide data, we can significantly reduce the carbon footprint of the internet. Let's be honest: We can't move back to pre-internet times anymore, and the aim should not be to abolish it, but to make it carbon efficient. Today there are many data centres exclusively powered by renewable energy, and their share is likely going to grow in the future. What we might want to cut down is binge watching movies on Netflix or Amazon Prime, and our Facebook online times. Not watching movies or not displaying images on websites is not the solution, but to tackle the big structures of carbon production helps. Do we really need to watch all new series on Netflix, even if they're bad? Of course not. Just as we don't need to check Facebook comments every hour (they're bad for your mental health anyways). So the next time you ask yourself where to start when it comes to reducing the carbon footprint, have a look at appendix I of this study and demand that these producers of carbon emissions reduce their share immediately.