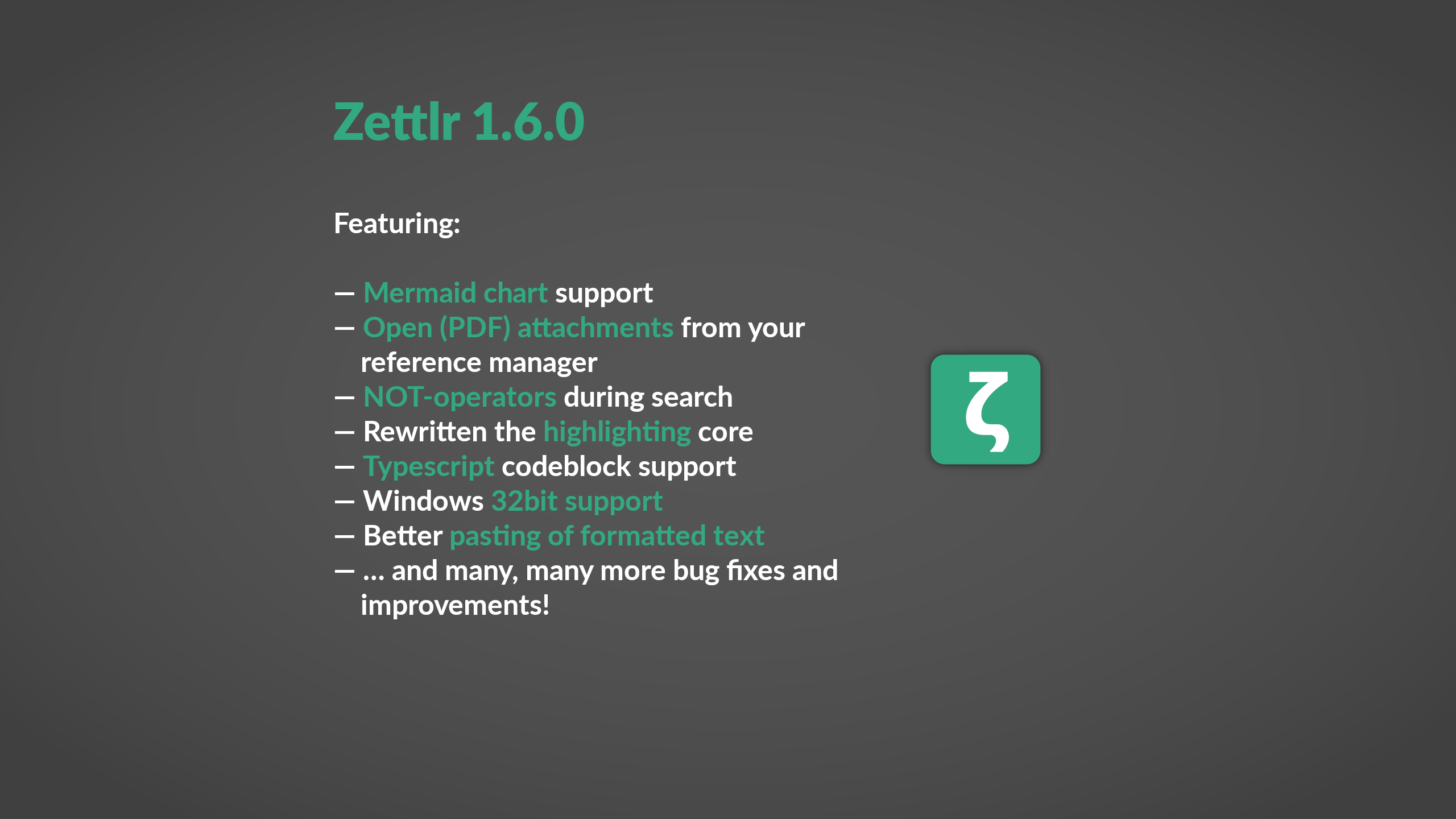 Posted in Announcements, Releases on March 06, 2020

Two exciting months are behind us, and we are proud that finally Zettlr 1.6 sees the light of the world! This update is really huge, so the release announcement is as well — make sure to read what beautiful changes this update brings!

Posted in Announcements, Releases on March 06, 2020

After more than two long months, we’re happy to announce that today the next version of Zettlr has been released! It took very long to make this happen, but as always we wanted to make sure to deliver to you the best version of Zettlr possible. After a record-breaking amount of six (!) beta releases due to the incredibly high engagement of the community in reporting bugs and suggesting great enhancements, we are pretty sure to having fixed most bugs.

But Zettlr 1.6 not only breaks the record in beta releases, but also in terms of Changelog length. The list is even longer than the list of changes we introduced in 1.5, so let’s quickly go through some of the most exciting news!

A lot of you wanted this (and by “lot” we do not mean to exaggerate — insert a “no pressure”-joke here), and finally we delivered: We’ve added support for Mermaid charts! To enable that on export, you’d have to add the custom pandoc-mermaid-filter, but within the editor, all charts will be previewed. In case you accidentally made an error, Zettlr will render the error message, so you know exactly what went wrong!

Stronger Together: Zettlr and Reference Managers

We finally were able to tighten the integration of Zettlr with your reference manager of choice! We’ve gotten in contact with the guys from JabRef and Zotero (more precisely, with retorquere from BetterBibTex) and now you can open attachments associated with reference items — directly from within Zettlr! If you use Zotero, make sure to have BetterBibTex installed (because that’s where Zettlr gets the information on the attachments) and Zotero running. If you use a BibTex-file, you don’t have to do anything, because the necessary information is already present in the BibTex files!

While the global search was already powerful, an essential search operator was missing: The NOT-Operator. From now on, you can make use of a NOT-operator by adding an exclamation mark in front of any term, e.g. !word. While the other operators work inclusive, the NOT-operator works exclusive. What this means is that if terms are missing from a file, the file will still show up in search results — albeit less relevant. If any NOT-term is found in a file, however, this will abort the search process and exclude the file for good.

Now, let’s quickly go over some important fixes and other chores that you should know about.

Something we’re pretty proud of is that finally the syntax highlighting is 100% stable. We have managed to fix all the errors that were still haunting the YAML frontmatter, and on top of that have removed a lot of artefacts that were still being generated in the Markdown mode. Now everything should work perfectly!

Also, if you have outline notes containing a lot of Zettelkasten links, go have a look after installing 1.6: You’ll love that these characters are now displayed according to other formatting characters: slightly transparent! MathJax formulas also do not pose any problems anymore and you should be able to delete all escape chars in front of dollar signs! Additionally, we have added syntax highlighting to code blocks during HTML and revealJS-exports so that your code is colourful!

With the help of GitHub user Zverik, we have managed to finally fix the odd HTML tags that were being spit out when you pasted some formatted code and wanted to retain the formatting. By using the Joplin library for transforming HTML-code to well-formed Markdown, we are happy that finally you can paste almost anything onto the editor, and do not have to resort to “Paste as Plain” because Google Chrome thinks it’s funny to retain all styles.

The dropdown that appears when you link Zettelkasten links will now offer you all files within the current root directory, not only the currently selected folder. This removes an additional step of switching directories if you work with nested Zettelkästen.

Some of you noticed that custom Zettelkasten link characters did not work at all. This had a very simple reason: Albeit we implemented the option to add custom characters, the default link indicators [[ and ]] were in many cases hard coded into the app. While this is certainly embarrassing, we would like to thank the users who noticed this and prompted us to a quick fix!

The Dreadful Save-Bug is Gone!

A sometimes rather annoying bug has been with the app since the beginning. And we can say this with certainty, because it was a logical mistake in code that stems from the very first version: Sometimes the edit flag indicating that the currently opened note is modified was not correctly reset in the main process when you saved a file, changed something, and quickly undid that change. This resulted in you being unable to save the files, at some points even leading to data loss. We’re happy to announce that this bug is gone for good now!

Last but not least, we’ve cleaned up the editor shortcuts. Previously, some shortcuts that were supposed to only work on Windows also worked on macOS, overriding other ones, and vice versa. This update fixes this, so that all shortcuts work as expected.

Albeit we’re not fans of 32bit systems as it’s pretty much legacy in an almost 64bit-world, a lot of you are apparently running 32bit hardware, so after many have asked this, we’ve added a 32bit build of Zettlr. Now, the Windows default installer contains both a 64bit and 32bit version of the app, and will install whatever your system runs on!

As you can see, 1.6 is really a leap forward. Please make sure to read the full changelog to be informed on what else has changed, and keep up the good writing! In the meantime, we will keep up the good work, and big things are happening in the background! So stay tuned!